When listening to a Techno or Electronic Dance Music piece the musical form is governed by building up and releasing tension. This happens a hundres times in a Techno night. The amount and density of musical sounds increase up to a climax, where the bass drum comes in in a four-to-the-floor beat.

The human brain shows an increased synchronization of neurons mainly in the gamma-band of an EEG signal when the tension is increased. After the climax the synchronization decreases tremendously, only to show increasing synchronization with the next built-up of tension.

Below is a figure of the change of mean brain synchronization within a Techno piece over time. The curve follows very precisely the musical form of in- and decrease of musical tension: 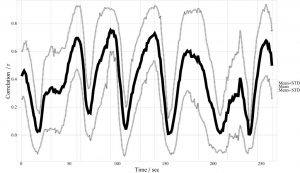