The output of spikes from the cochlear of a musical note with a harmonic overtone spectrum has the periodicities of the input sound. The Bark bands have normally a spike periodicity of the best frequency of the Bark band. Still a sound does not have energy all throughout one entire fundamental time period. Therefore within single Bark bands drop-outs appear, times when a spike is expected but there is not enough energy to produce one.

In the figure below the periodicities or frequencies (horizontal axis) of spikes at all Bark bands (vertical axis) are shown of a recorded sound of a guitar playing the note A. The fundamental frequency of about 204 Hz is present in nearly all Bark bands. There is an additional frequency around 100 Hz which is the Helmholtz resonance of the guitar. Therefore the pitch frequency is present all over the auditory nerve, while the timbre is distributed as periodicities here and there: 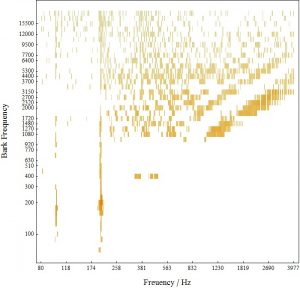 Therefore pitch perception is the presence of one frequency all over the auditory nerve. This also explains the salience of pitch compared to timbre. Pitch is more important than timbre which makes melodies so common, enable musical scores to mainly display pitches and make pitch the more salient sound property in listening tests like Multidimensional Scaling Methods (MDS).