The Wall is a metamaterial structure for damping the whole audible spectrum about equally. It can be used to damp sounds between the inside and outside of rooms. It can also be used to modulate room acoustics, in recording studios, concert halls, or at home. The damping includes very low frequencies, in the example below down to 44 Hz

Here is the wall realized as a 2 x 2 meter structure: 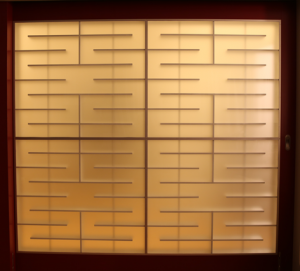 The wall is a labyrinth, where inside there is only air. In this example four substrcutres are used.

Metamaterials are complex geometries with astonishing acoustic behaviour, not found in nature. The materials they are build of are not important, it could be made of wood, metal or plastic. The only thing that matters is the geometry. Therefore they are simple and cheap to built. One of the astonishing properties is that they are made of substructures which are much smaller than the wavelength of the frequency the act on.

Below is an example of 44 Hz. This frequency has a wavelength of 7.8 m. But the substructure length of the wall (the lines) are 0.5 – 1 m in length, much smaller than 7.8 m. Therefore we would expect low frequencies to just move through the wall. But this is not the case, as shown below. Even 44 Hz is damped in the wall considerably!

This also holds for waves entering the wall at its front side, not only for waves coming from the sides. The reason is that acoustic pressure is a scalar, not a vector, and therefore has no direction. This means that if the pressure is entering the wall it will be distributed in the walls plane much better than transmitted through the wall. In other words, it is the Huygens principle acting here, that an acoustic wave front consists of many monopoles next to each other, all radiating in all directions equally at all times.

Using a Finite-Element Method (FEM) model the lowest frequency resonating in the wall is 44 Hz. Here is the pressure distribution in the wall for this frequency (red: positive, blue: negative pressure): 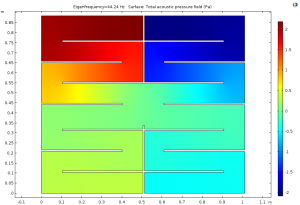 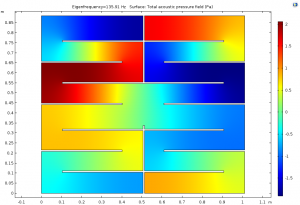 The osciallation in the wall is leading to a sound attenuation. Here is the damping of this wall for 20 Hz – 20 000 Hz, measured with three different microphones. The damping is considerable, with a mean of about 40 dB and peaks up to 80 dB damping. This can considerably be enlarged when adding soft material inside the walls interior boundaries. 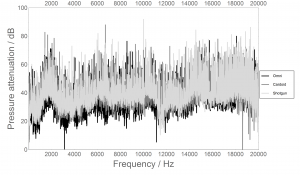 Looking closely in the low frequency region, we see the reason for this damping. When the sound wave approaching the wall meets a resonance frequency of its internal air volume, the sound wave is stuck in the wall and dissipated rather than let through the wall: 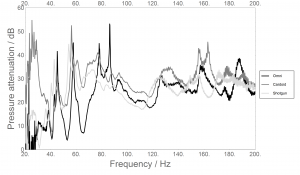