When examing the damping of a piano soundboard over different production stages, raw soundboard, adding bracing and bridge up to gluing it to the frame, it is interesting to see that damping is decreasing, especially in the last step when gluing to soundboard to the frame. Below is a plot of damping of different keys for the two stages raw (left) and fully glued (right). The damping is measured in T60, a room reverberation measurement. When knocking on the soundboard T60 tells the time until the sound has decayed by -60dB.

In a Physical Model of the piano soundboard the influence of soundboard damping on the vibrational patterns show a strong impact. Below is a grid of a soundboard where a piano string is acting on. When playing different keys the strings input the sound at different positions on the bridge, therefore also at different positions on the soundboard. The soundboard no longer vibrates in its eigenmodes, the frequencies it shows when vibrating on its own. With a string acting on it the soundboard is forced to vibrate with the strings frequencies. Otherwise we would not hear the string frequencies. The forced oscillation patterns (FOP) of a piano soundboard are shown below when varying the played key (rows) and when varying the amount of damping of the soundboard (higher damping are the columns on the left, lower damping those on the right). The plot below is for a very low frequency of a raw soundboard (no bracing, no bridge) to show that the effect does not depend on a complex geometry and therefore holds for other stringed instruments too. The lowest frequency of the model is 26 Hz, which is very near to a measured frequency of 24 Hz for a piano soundboard with the same dimensions. This is an eigenfrequency to show that the effect does not depend on a combination of eigenfrequencies, which would be the case when a string has a frequency which is not an eigenfrequency. 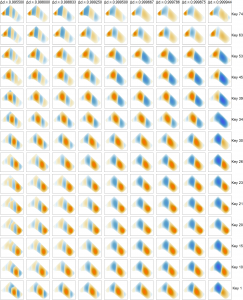 Clearly the impact point is the strongest vibrational point with high damping of the soundboard (left columns). When damping decreases the eigenmodes come in, still the driving-point dependency of high damping maintains to a certain extend.

The presence of eigenmodes give the played note a character, that of the soundboard. When damping is low, nearly only the sound of the string itself is heard. Still this has the advantage that the tone has more attack and is brighter. So there is a trad-off between character and attack. Therefore a piano builder can decide how much character he/she wants to give a piano sound.

When examining different driving mechanisms. again there is a difference in the piano soundboard motion. Only the point where the soundboard motion has the largest amplitude are shown. Below driving a soundboard with a string (like above) is shown in the very left column. The middle two columns show the case when knocking on the soundboard in two versions: the more left shows the case of knocking and investigating the whole knocking sound. The more right is the same knocking sound but analysis is only performed from 50 ms to 1 s of sound. The very right column shows the eigenmode, where each row is a different frequency, the top row is again the 26 Hz, the middle row is 86 Hz and the lower row is 186 Hz. 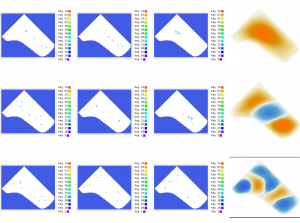 The maximum points are expected at positions where the eigenmode (on the left) has a maximum. This is clearly the case with the case of knocking on the soundboard and analysing only 50 ms to 1 s of the knocking sound. When taking the complete knocking sound for analysis the maximum amplitude points on the soundboard are more widely distributed. This is again the case shown above of the driving-point dependency. Still with the forced oscillation patterns (FOP) shown on the left the driving-point dependency is even stronger.

This shows that the radiation of a piano soundboard does not only depend on the played frequency but also on the played key. As each key or musical note has a large harmonic overtone series the same frequency can be played with several keys. This enlarges the spatiousness of piano sound tremendously leading to the envelopment perception of pianos when standing next to a real piano.

Below is a Power Point presentation of piano soundboard measurements also showing the driving-point dependency discussed above experimentally. The presentation also includes other cases of microphone-array measurements:

Measuring the piano soundboard with a microphone array at the Institute of Systematic Musicology, University of Hamburg: 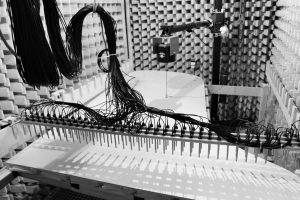 Here are the first four measured eigenmodes of the soundboard at four production stages: 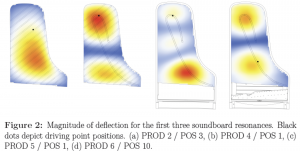 The wave speed of the piano soundboard also changes along the production stages. Below a measured waves of a soundboard when knocking on it. As wood is anisotripic, where the speed of sound is much faster along than cross-grain, an oval distribution is expected. Still when gluing the bridge and the ribs on, and when finally gluing the soundboard to the frame the situation changes tremendously. At the last stage the distribution is nearly perfectly round (for more details see Poster for download below):

Plath, Niko and Pfeifle, Florian and Koehn, Christian and Bader, Rolf, Microphone array measurements of concert grand piano soundboards in different stages of production, The Journal of the Acoustical Society of America 140.4, pp. 3317–3317

Bader, Rolf and Pfeifle, Florian and Plath, Niko, Microphone array measurements, high-speed camera recordings, and geometrical finite-differences physical modeling of the grand piano, The Journal of the Acoustical Society of America 136 (2014), no. 4, 2132–2132.