Musical instruments in Southeast Asia often have a tuning system which is considerable different from the Western tuning. Until now only very few theories exist why this is so. Hermann v. Helmholtz (1863) argued that the simple harmonic ratios (3:2 for the fifth, 2:1 for the octave, etc.) are preferred because of acoustical, physiological and psychological reasons. Then everybody in the world would need to prefer them. Still this is not the case. On the other side, if somebody from other parts of the world would come to Europe or Nothern Armerica and measure the instrument tunings he/she would also find all kinds of wired tuning systems. A piano or guitar is not at all tuned according to simple harmonic ratios. The same holds for all wind instruments.

Still in the West there is a huge body of literature on tuning. There we find the tuning systems being temperaments, compromises between an ideal tuning, just intonation with simple harmonic ratios, and compromises due to constraints. One such constraint is to be able to play a keyboard in all 12 keys, C-Major, F-Major, D-Major, even F#-Major, etc. Still when using just intonation, say for C-Major, the other keys sound horribly out of tune. Therefore C-Major is detuned a bit to allow to go through all keys. Many such compromises have been suggested, like Werkmeister, Vallotti, Kirnberger, Young, etc. Another compromise is that for most people a stretched octave sounds better than a perfect one. Therefore pianos are tuned with stretched octaves.

In Southeast Asia the situation is different in a way that there is nearly no literature about how and why musicians and instrument builders tune their instruments the way they do. But maybe they do it just this way, as compromises between a wanted tuning and constraints.

The Cambodian Roneat deik is such an example (see also Cambodia). This instrument has a tuning in between a Western just intonation and a 7-scale equidistant scale often found in Southeast Asia or Thailand: 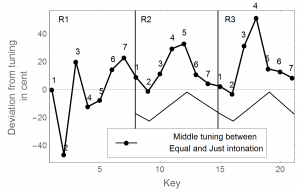 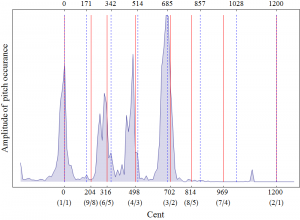 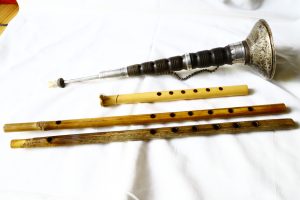