When a musical tone consisting of 10 harmonic overtones (figure below top plot) enters the ear the output at the cochear is a spike train (figure below, middle plot). This spike train as a delay of spikes, where the lower frequency spikes come later than the higher frequency spikes. This is due to the slow traveling wave on the basilar membrane. The interspike interval (ISI) histogram (figure below, bottom plot) shows spikes at the correct frequencies, still all of them are delayed.

Still the brain is performing a coincidence detection, aligning these spikes at certain nuclei in the auditory pathway, like in the trapezoid body. When the whole spike output is inserted in a single neuron, using a neural model, the resulting spike train can indeed have the fundamental periodicity of the musical tone. I.e., the neuron fires only once at each tone period, e.g. with a musical tone of 100 Hz it fires only 100 times per second.

Using different frequencies it appears at even a single neuron can do such coincidence detection up to about 300 Hz.: 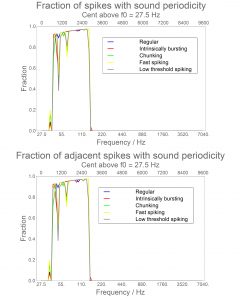