The frame drum below has been modified by adding magents in a circle. Below the drum with the magnets is shown. It is placed in front of a microphone array to record the drum head vibrations: 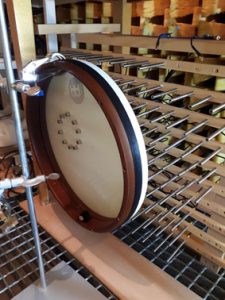 Where is the sound when striking the frame drum outside the circle:

When striking inside the circle:

And when striking the drum with no circle at all:

The reason is a frequency-dependent cloaking behaviour. Below are time frames of a strike inside the circle, recorded by a high-speed camera with a laser interferometry system. Some waves leave the circle, but much more stay inside: 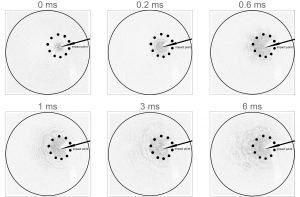 The opposite happens when striking the drum outside the circle. Most waves are not able to enter the circle: 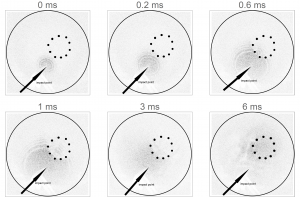 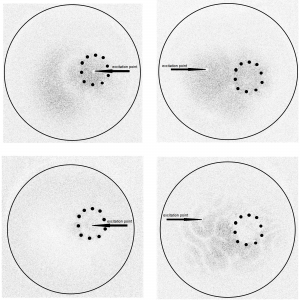 This leads to a band-gap in the spectrum between about 300/400 Hz and 700/800 Hz. Below are three figures, each have three spectra for three circles with diameters of 8, 10, and 12 cm. When stiking inside the circle (top figure) there is such a bandgap. Such a sound cannot be produced with a regular drum. When striking outside (bottom figure) a normal spectrum appears, indeed we hear a normal drum sound. The strike at the circle rim is again in between: 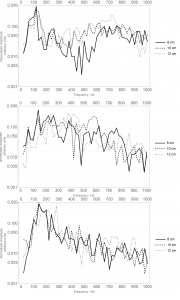 Therefore with a modified metamaterial drum, sounds can be produced not possible with normal drums. Still the normal drum sound is preserved and mixtures can be played, too.